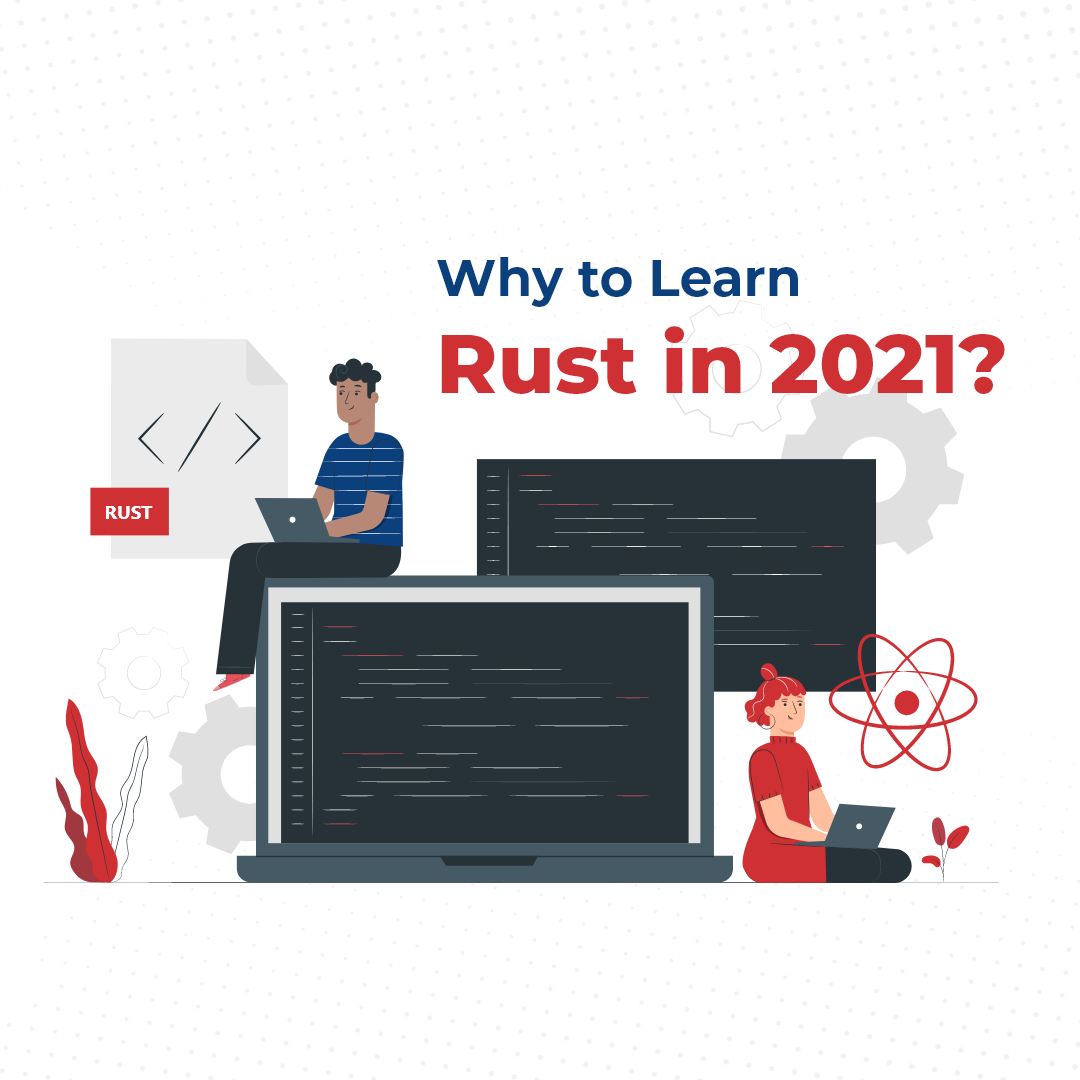 According to the surveys conducted by Stack Overflow, Rust has been the most-loved language by the developers for six straight years now. Put simply, developers who start using Rust in programming for their projects cannot get enough of it. To name one, Johannes Köster, the developer of the popular workflow manager Snakemake, was looking for a language that offered the ‘expressiveness’ of Python but the speed of languages such as C and C++. Rust was the language that he went with.

Rust blends the features of high-performance languages like C, C++, and memory handling capabilities and simplicity of modern programming languages. In this Rust blog, we will take a look at some of the reasons you should learn Rust in 2021.

If you are already working in the development industry, you probably know the comfort and ease of static typing. Rust in programming is a statically typed language. Consequently, all types are known at compile-time while programming in Rust. Additionally, one of the reasons to learn Rust is that it is a strongly typed language. In other words, it is harder for developers to write incorrect programs with Rust.

Rust in programming also allows you to manage complexity seamlessly. It maintains a high level of simplicity and enables developers to keep up with what is going on in the code. In addition, Rust does not require you to declare the type of variable multiple times. Essentially, Rust enables nesting and closures and enables unmatchable maintainability of the code.

Rust owes its outstandingly high speed and performance to the absence of garbage collection. In addition, it does not have runtime checking and the compiler stops the wrong code immediately. So, unlike other languages, Rust in programming prevents incorrect code from proliferating and wreaking havoc on the system. Furthermore, Rust offers excellent performance for embedded systems as well.

Rust’s high performance with the simplicity of syntax makes it an ideal choice for a wide range of programming projects. So, if you’re wondering, “should I learn rust?”, you should. It will increase your employability as a developer and improve your programming experience.

Languages like C have manual memory management which is a nightmare for projects that demand a low-level memory control such as systems programming. One of the reasons to learn Rust is that it offers convenience on low-level details. It offers direct access to hardware and memory because of the absence of a garbage collector. In other words, you can replace pieces of code without taking memory safety risks in Rust, much like a microcontroller application for low-level codes.

Rust in programming is a resource-efficient and in-demand feature in an embedded system. It also eases the developers’ job by easing bug identification and preventing any future issues with the device. Rust also offers zero-cost abstractions which means that it accepts whatever abstraction of code you use. These are a few reasons for the importance of Rust in embedded programming.

If you want to build cross-platform solutions, you should definitely learn Rust. Rust allows you to build cross-platform solutions that work on all the major operating systems including  Linux, macOS, and Windows. It supports both front-end and back-end development allowing you to develop solutions conveniently. Web frameworks like Rocket, Nickel, and Actix further simplify development in Rust significantly.

One of the reasons why you should learn Rust is the expansive ecosystem of tools it has to offer. The horizon of the Rust ecosystem is expanding very quickly with its rising popularity in the programming world. The importance of Rust can be understood by knowing that it is more than just a language or a compiler. It is an ecosystem that focuses on all the aspects of software product quality.

Rust developers use Cargo, the command-line tool, that helps in managing dependencies, running tests, and generating documentation. Similarly, there is a Rust community site, crates.io, which caters to the Rust library needs of the developers. All the documentation of any library published on crates.io can be found on docs.rs. Additionally, property-based testing, benchmarking, and fuzzing are also easily accessible for developers.

Rust in programming is not the perfect programming language. It does have some disadvantages. Some developers have found it quite complex. It can be difficult to learn and is slow in compiling too.

Rust is strongly typed and focused on memory safety which can create errors while compiling your code. The Rust community is finding new ways to improve these error messages and make them clear and actionable. In addition, Rust is relatively new and hence does not have some desired libraries.

However, the benefits and importance of Rust far outweigh its cons. From performance to ease of programming, Rust offers one of the best programming experiences to its developers. It packs the speed and performance of languages like C and C++ with a friendlier syntax and a well-engineered set of tools that simplify development. It also focuses on code safety and maintainability.

So, if you’re a developer or an aspiring developer asking, “Should I learn Rust?”, the answer is definitely yes. It will make your job much simpler and productive for future programming projects. Its wide-ranging applications will help you become versatile and grab various opportunities.