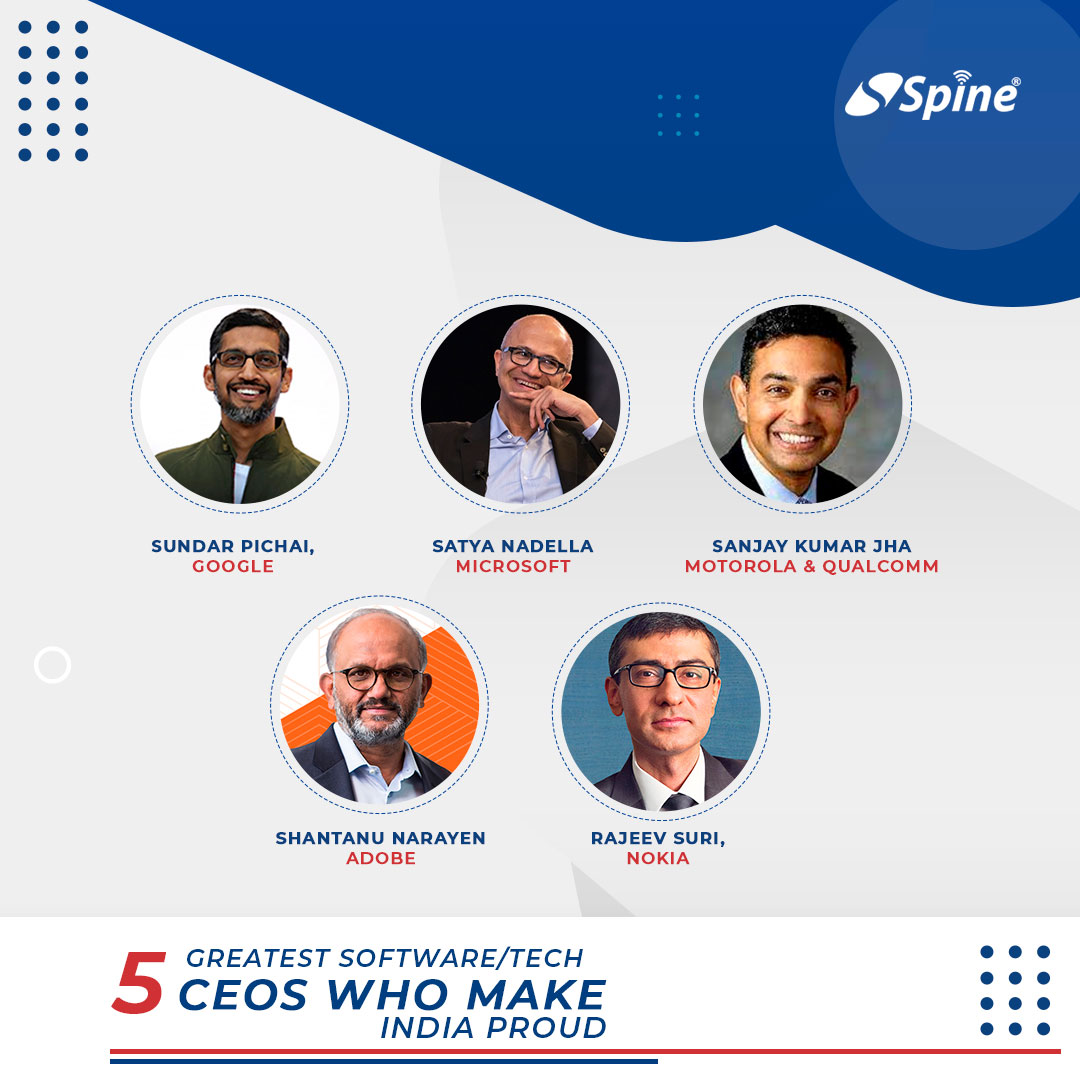 India is known all across the globe for its rich culture and heritage. However, these days India is also quite popular for giving the world some of the best software and tech CEOs that they have seen in a very long time.

These people have Indian origins and are doing their job better than many others. They have maintained the decorum of their organizations, have innovated their companies, given the company a better escalation in terms of its profits, proficiency, and profoundness.

These Indians are making their presence count all across the globe! And it’s time that you should also be familiar with who they are, what they do, and how they are making a difference in the world. And we’ll help you with that by taking you through the five greeted software and tech CEOs who are making India proud. This list is given below.

One of the most successful CEOs of the biggest tech company ever is Sundar Pichai. He is an Indian-born genius who has family roots in Tamil Nadu. Sundar Pichai completed his graduation in the field of chemical engineering from IIT Kharagpur. He later went abroad to pursue his higher studies.

Sundar Pichai joined Google at a young age and worked his way up to become the CEO of Google. Sundar Pichai often visits India during the Google Products launch. Over the years, the company has flourished a lot in India and all across the globe since Sundar Pichai took the lead.

Microsoft is known all across the globe as one of the biggest software manufacturing companies in the world. This organization has its reach in almost every household in India. And Satya Nadella is the CEO of Microsoft who has played a big part in achieving that goal.

Satya Nadella finished his bachelor’s degree in Electronics and Communications Engineering. He pursued this degree from the Manipal Institute of Technology. He also holds a degree in MBA. Satya Nadella has been the CEO of Microsoft since 2014 and holds a lot of influence in the tech sector of the world.

Motorola mobiles exploded all across the globe during the early 2000s. These devices were extremely popular at that time. The company did lose its luster and the product craze over time. The main reason behind that was the popularization of smartphones. However, the company has now caught up with the pace and is one of the biggest manufacturers of smartphones in India.

A big part of that credit goes to Sanjay Kumar who is a Ph.D. holder in electronics. Sanjay Kumar comes from a very humble background in the Indian state of Bihar. He is widely known for his knowledge of semiconductors. He is popularly known for being the CEO at Motorola Mobiles and the Chief Operating Officer at Qualcomm.

Whether you are a photographer, editor, graphic designer, animator, filmmaker, or just someone who loves taking photographs, there are no chances that you wouldn’t have heard of or used Adobe. Adobe is one of the largest software companies in the world. And Adobe’s CEO is also an Indian.

Shantanu Narayen is a global personality who got into Adobe’s chief operating position in 2005. He comes from Hyderabad and has pursued his graduation in Electronics and Communication from Osmania University.

Shantanu Narayen is also the recipient of the Padma Shri Awards in 2019, which is the highest civilian honor in India. Under his leadership, Adobe has become one of the fortune 500 companies recently.

If you ask any millennial about the type or company of mobile phone that they would prefer, you are very likely to hear the company Nokia from them. Nokia is a brand that holds a special place in all our hearts. And currently, the company is run by Rajeev Suri.

Rajeev Suri joined the company in 2015 and turned it towards producing some of the best quality smartphones in India. Rajeev Suri completed his bachelor’s degree from Manipal Institute of Technology in Electronics and Communication.

Rajeev Suri has played a big role in pulling the company together and giving it a new direction. This has allowed the organization to enjoy the success that it currently holds in the market.